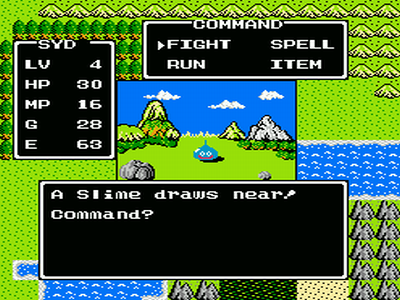 Go play Dragon Quest man. It’s fucking awesome. The protagonists of the series being playable in Smash Ultimate was probably your wake up call about the existence of Dragon Quest in the first place but that’s not enough.

Playing any of the Dragon Quest games is a rite of passage that shows you’re probably a really epic dude and if you don’t like Dragon Quest, you’re a fucking loser, plain and simple. If you don’t like Dragon Quest I bet you probably simp out hard for some Twitch thot who could give less of a fuck about you, yet that doesn’t change the fact you give her 50 bucks every time she starts another stream where she does nothing but eat Subway and show off a lot of skin while wearing a small spaghetti strap tank top without a bra.

Why did Hitler hate the Jews and commit genocide on them in the 1940s? Because the NES didn’t exist back then so he didn’t have the chance to play Dragon Quest 1. What was the motivation of Eric Harris and Dylan Klebold behind their massacre of Columbine High School? Dragon Quest 6 for the Super Famicom wasn’t brought to North America, that’s why.

I’m playing Dragon Quest 1 and 6 right now and I have the DS versions of the fifth and ninth games coming in the mail soon. I’ve become totally obsessed with Dragon Quest and I can’t resist the urge to drop everything and keep playing. The gameplay is so rewarding; every time you level up and see how your stats have increased you feel like a god. Same goes for equiping new weapons and armor or learning a new spell, you just feel like you can do anything.

The fact that Dragon Quest isn’t a huge cultural phenomena in the west like it is in Japan is a fucking disgrace and I’m smh rn because of how uncultured you simps are.