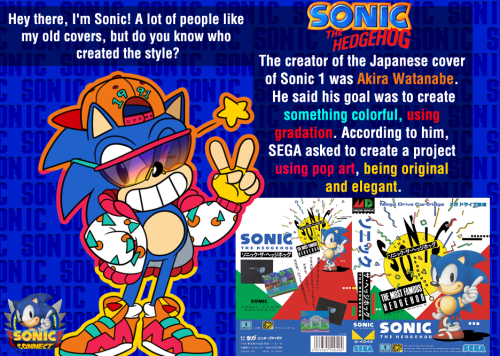 Last month, me and The Boy Named Crow had a chat.

Me: Do you know who Watanabe Akira is?
Crow: Is he a politician? Or a game developer? Or an anime director?
Me: Japanese game artist
Crow: Capcom?
Me: Sega
Crow: Sonic?
Me: He does all of this beautiful cover arts. Yes.
Crow: I can recall his art arm
Crow: *ATM
Me: https://pbs.twimg.com/media/EiDRe5bUMAYCkCQ.png
Me: I love the colors. And the shapes.
Me: https://pbs.twimg.com/media/EiDRie3U0AIgKRc.jpg
Crow: Oh yeah this was prototypical Sega back then
Me: https://pbs.twimg.com/media/EiDRvMkU8AAln9F.jpg
Crow: The jagged edges was an interesting astethic choice. Very Memphis-Style inspired
Me: What's Memphis
Me: https://64.media.tumblr.com/13bf1c51ba977c307944b68e44f3e4af/tumblr_o989faTnz41ulp8mfo6_500.jpg
Me: https://64.media.tumblr.com/db51ef59abaa83611de34625900c50d0/tumblr_o989faTnz41ulp8mfo7_540.jpg
Me: https://pbs.twimg.com/media/EiDYJ4AU0AEZH4v.png
Crow: This style
Crow: https://i.imgur.com/4AT0Wt9.png
Crow: https://i.imgur.com/JmmR6Tr.jpg
Me: Uwaa~
Me: Beautiful
Crow: https://i.imgur.com/qYGkVrp.jpg
Crow: It's very 90s as well heh
Me: The of the few gud things about that decade. I've been afraid of that people in this decade are feeling nostalgic for that time
Me: It's gonna make life really unbearbale
Crow: Yeah people getting over 80s stuff now people jumping on the 90s nostalgia bandwagon.
Crow: I liked the 90s before it was cool. Lol.
Me: How awful
Me: I see people obsessed with rebellion and conspiracy theories. I hate it.
Me: That capital raid is emblematic of this wider problem.
Crow: Yeah well the establishment is being blatantly opaque and belligerent. If people were woke sooner we could have avoided this.
Me: But people are trying to advocate for socialism, anarchism, and also becoming luddites by saying technology is bad.
Me: Even though it's good. And the answer to the problems of the world.
Crow: Technology is neither good nor bad.
Crow: It's how people use it, and right now people are using it to set up their own data driven empire.
Crow: They work with China on monitoring and censoring people and people say to shut up about it
Crow: ‘That's just how the world is’, they say
Me: LMAO just use Yahoo or DuckDuckGo
Me: Don't fall for that Gen X'er mindset of hating everything but doing nothing about it.
Crow: Nah man they got a pretty good system going on you would have to try really hard to get away from it
Crow: Even if you got a fake name and email if you connect to your home internet they can match the IP address to your internet device
Me: Use proxies
Crow: Even if you got a fake name and a fake phone and a VPN if a friend connects to your wifi without the vpn they can figure out that your friend is at your house and the AI will guess that your fake identity knows this guy somehow.
Me: But why you even let your friend do that then.
Crow: You thought as long as you were using proxies you were safe, but it can implicate other peoples data to verify yours
Crow: Like how do you think facebook recommends people you might know
Me: Ohhhhh
Crow: It's the same technology
Me: Don't use Facebook I guess
Crow: Yeah and google play services, iCloud, and apple
Me: Personally, IDC if a corporation has my data. Like, does it really matter if they know I use Pornhub?
Me: I'm a nobody
Crow: They're using it to make money. Sell you crap.
Me: And? There's nothing wrong with making money.
Me: It what makes teh world go around!
Crow: Well I'm fine with that but
Crow: They're starting to use this shit to influence public discourse and political shit.
Crow: Also they're making a lot of money off of us I think if that's the deal we should be getting paid for it at least
Me: Woah woah, that's sounds like redistributing wealth
Crow: I feel like it's a bad deal for us that's why they try to keep it secret from people how it works.
Me: Yeah they should be more honest. Make the rules apparent from the start.
Crow: Wouldn't be surprised if tech companies would start using the data to go after people they dont like. They kicked Donald trump off everything so what hope do normal people have fighting against it
Me: Trump insighted terrorism. He's on trial for what he did.
Crow: Convicted rapists and murders can have social media. They let that shit happen so they could blame it on trump afterwards.
Me: No way
Crow: Not a single person can quote me what exactly trump said that counts as inciting violence.
Crow: And how it's any different from #hangpence and #killdonaldtrump
Me: Lemme see the tweet
Crow: Double standard bullshit because antifa and BLM were helping Biden win. Now that hes in office they said fuck you guys, you're also political extremists
Me: They are
Me: Raiding the capital makes you that, even if it is a double standard
Crow: Yeah but nobody gave a fuck when BLm and antifa took over Portland
Me: I never said that was good.


Eventually we changed the subject.


Me: I also saw last year that people were starting to watch this 90's sitcom I've never heard of before called The Nanny
Me: That's pretty weird for nostalgia...
Me: Though the OP for that show is catchy.
Me: https://www.youtube.com/watch?v=1bMaS-Dq3Gk
Crow: Yeah well it's like morpheus said
Crow: Late 90s was peak of humanity
Me: That is wrong
Crow: That's why the matrix was modeled after it lol
Me: The peak of humanity was the 80's and the 2000's
Me: God I loved the 2000's
Me: The PS2 was the greatest video game console ever made.
Crow: Yes. Was goin to say the same lol
Me: Plus the internet was funny and silly back then
Me: There was whiny teenage girls on MySpace and Livejournal Who were funny to mock
Crow: Yeah internet wasn't serious biz
Me: Alternative rock was at it's peak
Me: And was really gud
Crow: Yeah it was