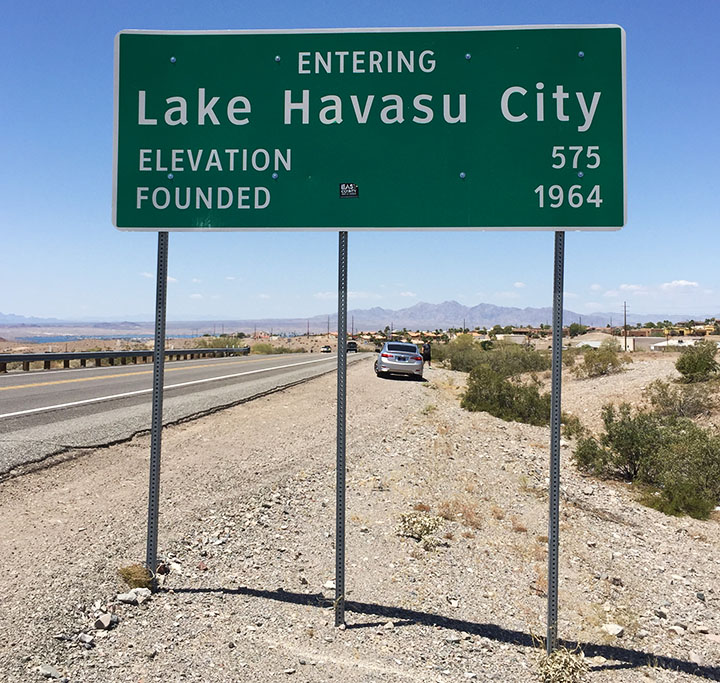 So we didn’t go to Washington. We went to Lake Havasu. Apparently dad worded it wrong and meant that uncle Malcolm was about to move to Washington and that we were gonna visit him in Lake Havasu, where he lives before he moved there. Anyways, dad rented a white Nissan Altima that had this cool bluetooth thing that could play Youtube shit from our phones and we could also charge our phones as well which was useful because it was quite the lengthy ride. The air conditioning would make the ride to Arizona a lot more tolerable.

We left on August 14th, a Friday. Dad was at work as usual so I was the only person in the house when I woke up. The previous day I had hacked my friend Clark’s 3DS Xl for him. Clark was originally a friend of my mom’s. I don’t know how they met, but it probably involved drugs. I don’t specifically remember how we met either, but mom probably introduced us or something. Probably because we both like vidya gaems and I’m lonely. We started to hang out a lot more after mom died. I like him a lot.

He came over to grab his 3DS and we chatted about games and stuff and then he left.

I was on my phone watching Youtube videos in the living room when my dad opened the front door and then I asked if I can go and see the car which he said yes and I walked outside to go and see it and then me and him put our shit in bags and then we got into the car. We started driving at 6 something PM.

On the freeway we drove from Van Nuys to Burbank & Glendale and kept driving East to places I’ve never seen before like Hesperia and Rialto. We then started driving to the north where there was absolutely nothing to see except courier truck after courier truck and gigantic sheets of orange and gray with pieces of green and yellow on top with the setting sun being the cherry on top which set the mood.

When it was nighttime there was no streetlights like there was in L.A at all and everything was pitch black. I couldn’t make out the shape of anything outside of the car besides what the car headlights showed me. Me and dad stopped at a local liquor store that looked packed and when I opened car door I experienced the first of many blasts of obnoxious heatwaves and me and dad bought some snacks including some ice cream that almost melted by the time we left the store because of the long ass line that made it take forever to get to the counter.

We finally made it back into the car which is when I ate my 2 beef jerky sticks which sometimes gives my shit a dark reddish brown color and a unique smell. I then finally ate my ice cream sammich and fingers got sticky.

”Don’t stain the car. They will charge me if there’s a mess.” Dad said and when he said that it reminded me of that scene in Pulp Fiction where they accidentally shoot that guy in the back of the car and there’s blood everywhere. That just popped in my head for no particular reason. I then walked out of the car to wash my hands and take a piss and tried I to walk to the nearby public bathroom behind the store but some employee told me to go the other bathroom that’s inside of the store for some fucking reason and then I walked back inside of the store and got into a massive line that where I would wait 3 minutes for the next person to get out and I was starting to get really itchy skin and I felt pissed off.

We passed by more valleys of darkness for what seemed like forever. Even dad got a little concerned and wondered if we like, went the wrong way or something. We kept driving until we saw the sign telling us that we finally made it Lake Havasu. As we finally drove into town I saw a neon Wal-mart sign that read “Pickup” which I briefly misread as “Kidnap” for a split second.

When we made it to Malcolm’s house he was waiting outside in the driveway and he opened the garage door and led us through the house there. I walked into a small kitchen and dining room and right next to it was the living room where the TV was on and was playing a nature documentary on BBC America with the volume off. I laid down on one of the couches. Malcolm told me about the bedroom I was going to sleep in which was apparently Wendy’s room before she left for Texas with aunt Helga. As soon as he mentioned that room I made a beeline to that bedroom because it was 12 in the morning. The room was cold af and there were no blankets but I fell asleep with minimal bullshit.